I've noticed that some people want to know more about the cameos in HOTLINE MIAMI and instead of just putting down a list I made a card series! Once we re-design our site, I'll put these up and add links to everyone if you want to learn more about them. Might be printable in the future so I won't reveal them all just yet. But here are a few (click to see bigger versions)!

I feel like writing a little bit about the AI in Hotline Miami as I've noticed from reviews and comments that it's not entirely clear how it is supposed to work.

There is basically one enemy behavior in the game, but there are several different variations. It's easy to confuse these as most enemies have the same look. The main enemy (white suit, blue shirt) is actually used as essentially five different enemies, and given certain conditions he can switch between different AI behavior.

This AI makes the enemy walk around totally at random, these enemies are always armed with guns and are hard to predict as they may end up moving between rooms. Any enemy you knock over will switch to this AI when he gets up unless he finds a melee weapon.

This behavior is used in both a melee and a gun wielding enemy, they will turn left when a wall or some other solid object blocks their path. The only difference between the one using guns and the one that has a melee weapon is the way they attack you given the range of their weapons. Knocking out an enemy will give him this behavior if he finds a melee weapon to pick up.

This AI is in guard mode, and will not respond to gunfire, it only reacts to visual contact with the player. If enemy with this AI is equipped with a gun he will try to shoot you on sight, if you retreat he will chase you and then return to his post if he can't find you. The melee version will chase the player instead of shooting him.

Another issue that might be confusing with the AI is how the gun toting enemies will react to seeing you. At some times it might seem they immediately turn around and shoot at you, and in other instances they will need to turn around slowly before they start to shoot. This is intentional and depends on how far away from the enemies you are when you approach them. If the enemy is at a fair distance from the player he will immediately jump around and kill you, this is meant to communicate that it's more risky to approach an enemy this way and should be avoided. The results would essentially have been the same if he had turned around more slowly, but would make it seem like a more plausible way to tackle the situation. Enemies will take about a second to get their guns pointed in your direction if you are closer to them when they first see you, which gives you a better opportunity to kill them regardless of your weapon of choice.

All of this could have been made more clear by giving different AIs different graphical appearances, but that would complicate the way we let enemies be able to pick up weapons on the fly and handle situations in a more interesting and complex way.

One of the things that makes the game fun to play is that we put so much effort into making essentially one basic enemy that is fun to engage for the duration of the whole game without making it feel way too repetitive. And I think this is largely to be attributed to the design decisions we made when designing the AI.

Another issue that has been brought up and criticized by many are the boss fights. The general consensus seem to be that they break the flow of the game and feel out of place. This is also intentional. While we didn't necessarily want people to hate these parts of the game, they are meant as a break from the regular enemies that make up the majority of the gameplay challenge. If the game kept doing the same thing over and over without any dips in fun and flow, then the peaks where you get to the meat of the game would be reduced and start feeling repetitive instead. It's a bit of a trade off but they serve a purpose to the story and makes it fun to get back to the regular gameplay afterwards.

If we make a sequel we will definitely try to experiment with potential boss fights and make them more polished and fun, but it's a hard thing to accomplish in a game like this where you can't simply let your imagination run wild to create engaging scenarios as it is equally (or more) important not to have them clash with the style and tone of the game. I would be very interested in hearing suggestions for different approaches we could have used to tackle this problem, as there are very few good examples out there that we can look at for inspiration (toned down boss fights in top down shooters is something I'm very unfamiliar with).

And I think most people will be glad to hear that we have no plans of ever adding a pure stealth level to any of our games in the future.
Upplagd av cactus kl. 12:23 37 kommentarer:

someone dressed up as an animal runs into a room filled with people, without having a plan on what to do and dies!.... HOTLINE MIAMI
Upplagd av Dennis (D.W) Wedin kl. 01:41 31 kommentarer: 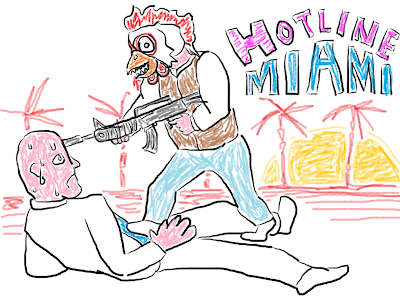 Adorable fanart from my 10 year old cousin. He really likes the game and told me that he plays it every day, but he hasn't managed to get past the first boss level yet.
Upplagd av cactus kl. 17:29 11 kommentarer:

"Hi! It's Dennis. I can't answer right now, so either try again later or leave a messege and i'll get back to you" *BEEP*

"Hey Guys, it's *CENSOR BEEP*. I need you two to stop working on that game of yours and come to this party at Väderkvarnsgatan 13A right away! It's sooo damn boring people here might aswell be dead. You have to come and show these losers how to drink cause i'm pretty sure they are all just shooting blanks. So see you in a while and don't forget to bring the real stuff. *BEEP* 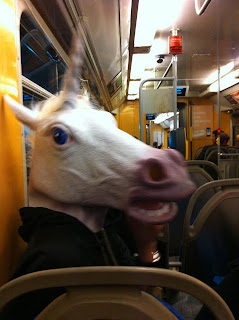 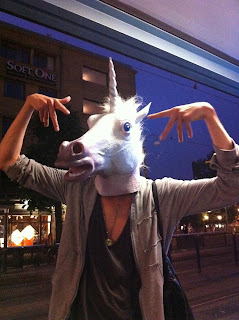 What is HOTLINE MIAMI?

Hotline (/hɑːtlahyn/) is a point-to-point communications link in which a call is automatically directed to the preselected destination without any additional action by the user when the end instrument goes off-hook.

Miami (/maɪˈæmi/ or /maɪˈæmə/) is a city located on the Atlantic coast in southeastern Florida.

See the instructional video below for more information:

Burning Desire For The Future Of Entertainment